A new, more rigorous and well-structured study about the civilian death toll in Iraq has been published, a successor to the controversial Lancet studies of 2004 and 2006. Taken in 2011, it used a more representative sample and was able to survey most of the country- the Lancet studies had to deal with serious amount of violence and parts of the country that were a no-go for researchers.

Ultimately it puts the combined deaths of the conflict and the huge migration in and out of the country at just over 460,800. Three-fifths of the non-migratory deaths were violent in nature, the rest caused by the breakdown of services and infrastructure, like hospitals. The figure is contrasted with the second Lancet study, which put the number at over 650,000, and the Iraq Body Count, which relies on confirmed deaths, in in the 100-125,000 range. As in most surveys, a simple count will miss certain groups and regions. The new survey makes well-founded estimates and will be the standard by which any future evaluations are measured. 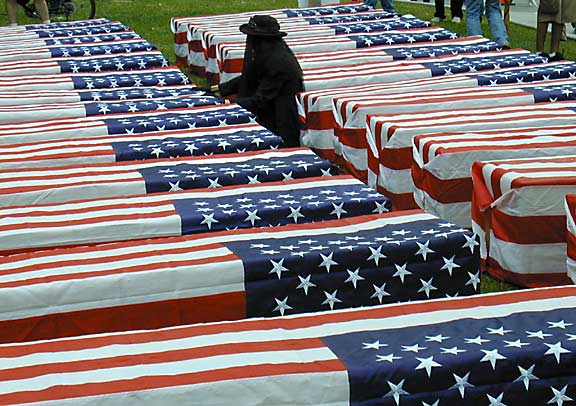 Americans are aware the American lives lost, but have very little idea of the massive amount of Iraqi civilians who perished as the result of the invasion and multi-pronged insurgency that followed. A 2007 poll (PDF) found that the a majority of Americans thought less than 10,000 civilians had been killed- only 15% thought it had reached six figures.

Of course, this new study reminds us once again how incredibly pointless the Iraq War was. What little was accomplished (such as a more democratic Iraq) seems to be crumbling- the exit of the last troops was followed by the arrest and trial in absentia of the Sunni vice-president. A great many lives could have been saved by using the hundreds of billions of dollars spent to create infrastructure and eradicate disease. Universal healthcare could have been a reality years earlier. Using the Cost of War site, one can calculate what portion of war spending your town contributed. By their calculations, the money spent in Iraq was enough to supply every household in the city with solar power for forty years (obviously more, given falling solar prices).

So it is a good point of meditation. And it asks- if Iraq was such an expensive, bloody, pointless war, how did it happen? And how can people, in outrage and solidarity, keep it from happening again?

One thought on “What we all lost in Iraq”