A good article by Thom Senzee about conflict within the San Diego Black Lives Matter movement.  The original group had older leaders who wanted to focus on the “black” aspect solely, to the exclusion of other identities like LGBT+. Given that LGBT+ people are especially vulnerable to hate crimes, any good group needs to deal with the intersectionality of black and other identities or labels. It also reminds us that the black community has its own issues with intolerance, particularly given the large population of evangelical Christians.

Homophobia and transphobia inside any Black Lives Matter local chapter is beyond ironic, according to Cat Mendonca (31) of San Diego. She points out that the movement itself was founded by three people who identify as queer women of color.

“There’s a lack of understanding that the Black Lives Matter movement, which they say they believe in and claim to serve, is and always was a queer-inclusive, queer-affirming movement,” says Mendonca, referring to a small but forceful group of leaders of the old BLM-SD chapter. “It was really disappointing and distracting.”

Social media messages obtained by San Diego LGBT Weekly purportedly shared among leaders of the old, now-dissolved local Black Lives Matter San Diego chapter reveal that the group may indeed have been tainted by homophobia and transphobic sentiments from at least one leader.

“The movement is supposed to be a safe space for all people regardless of their race, ethnicity, sexual orientation or gender,” says Mendonca.

In my current home of San Diego, a man named Fridoon Rawshan Nehad was shot this spring by a police officer. While there was a surveillance video of the shooting, its release was blocked by much of the political apparatus, most notably District Attorney Bonnie Dumanis.

The video is obviously graphic, and is available here. Officer Neal Browder arrives on scene around four minutes in, with him opening fire about 25 seconds later. In this screenshot Nehad is in the foreground, and the white flash is a gunshot.

I won’t go into the details of the video itself, since it seems discussion of systemic state violence gets bogged down into a ‘was the victim threatening’ discussion for each case. What I will say is that Nehad did not have a knife (he actually had a pen), he was experiencing a mental health episode, he was not moving any faster than a casual walk, and though he was walking towards Browder he was not walking at Browder.

That this situation even happened is testament to how people fall through the cracks- Nehad suffered from serious mental illness and houselessness for many years prior to his death. Despite the prevalence of mood disorders and schizophrenia, most police departments have no understanding of how to deal with individuals who are unable to understand and comply with police demands.

District Attorney Dumanis and the police leadership are selling the same justification as usual- the idea that as the victim was an imminent threat, lethal force is justifiable. 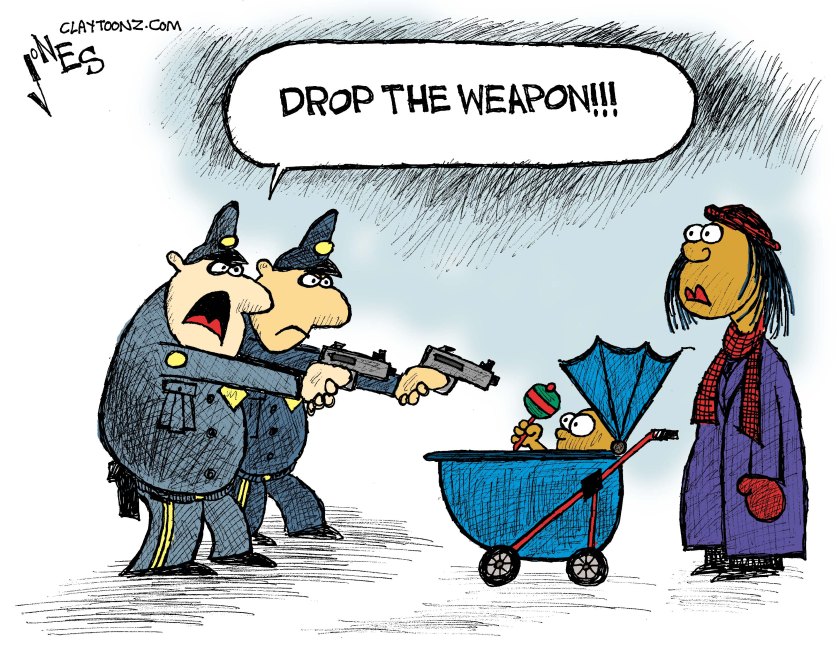 This thinking ties the domestic to the international. Drone strikes, airstrikes, and the wholesale invasion of nations are all justified based on imminent threat ideology. With the militarization of the police, calculations about the use of lethal force by American institutions sound the same no matter where on Earth you happen to be.

But the thing is, the definition of an imminent threat can only be stretched so far. Nehad was erratic, but he was not in any sense threatening. Most of the body count from drone strikes had no connection to threats against the US or the West. The structures of power, at any level, want the maximum amount of autonomy and the minimum amount of accountability. Eliminating threats is only the stated purpose. Gaining power by setting precedent and pushing against any and all limitations is the key. With DA Dumanis (known for being corrupt) as an ally to prevent judicial oversight, the police rise above the law.

Many cases since Mike Brown throughout the United States were even more egregious than Nehad- they lacked even the foundation of a defense. But almost nobody goes to jail. Police security culture makes investigation and prosecution- even if the courts are willing, all but impossible.

The list of those killed by city and county police in San Diego is long. The answer to ‘who polices the police?’ is pretty simple- it’s you. Agitation at the grassroots level have made sweeping lethal police shootings under the rug far more difficult. Popular opinion since Ferguson has shifted radically. The idea that America is not a color-blind, egalitarian society is creeping into the mainstream. Police power grows best in the shadows, and the institution never expects dedicated resistance.

Following the press conference by United Against Police Terror and its allies this morning, news coverage is pouring in. The conference was followed by a perfunctory statement by the department stating that they were taking the matter of hate email coming from the Sheriff’s Department IP address “very seriously” and were conducting an internal investigation.

The email says, in part, “The police aren’t the problem. It’s the criminals out there victimizing the real citizens of the country that are the problem.”

Much of the email is too profane to broadcast on TV or copy in an article.

Mendonça said perhaps the most troubling part of the email was where the writer described Ferguson protesters as “animals.”

“It just perpetuates that ‘lesser of a being’ (stereotype), and it highlights how much racism is still present to this day,” [Catherine] Mendonça said. “There’s still hundreds of years of racism that we still need to overcome.”

The email rant that referred to Ferguson, Mo. protesters as animals and said “real citizens” of the county love the police was sent Sept. 16 to the website of United Against Police Terror San Diego, its spokeswoman, Cat Mendonca said.

Mendonca held a news conference outside the sheriff’s Kearny Mesa headquarters on Tuesday to say her organization had filed a complaint with the Citizens’ Law Enforcement Review Board, which handles complaints against sheriff’s deputies.

Protesters are calling on Sheriff Bill Gore to take action after a profane email traced back to sheriff’s headquarters was sent to an activist group critical of law enforcement policies.

The Anti-Media: “Email Traced Back to San Diego Sheriff’s Shows How Cops Really Feel About Protesters” by Derrick Broze

This latest saga between police accountability activists and the police is yet another example of the divisions gripping the country. Without a doubt, individuals who threaten violence against other free humans should be held accountable. However, we should not allow ourselves to be sucked into a false paradigm of the people versus the police.

Any good-hearted police officers remaining within the ranks of the increasingly militarized local police departments should quickly leave as conscientious objectors. Only by making it clear that their intention is to support the community — not defend the state — will officers gain the support of the people. At the same time, the activists in the streets should make it clear they are against violent criminals, not misguided individuals who joined the police force in an effort to serve and protect.

We can find common ground and strengthen our bonds and unity by recognizing the way this system is dividing us along lines of race and profession, among other things. We are one and it’s time we start organizing and acting like it. Let’s not further divide ourselves. Instead, let’s work towards the harmony and unity of all people and focus our energies on our mutual enemies.

The Raw Story: “Someone in the San Diego sheriff’s office thinks police protesters are drug-addicted ‘animals'” by Travis Gettys (Sept. 24)

But investigators soon learned, like the babysitter in the urban legend, the calls are coming from inside the house.

spokeswoman Cat Mendonca and Lt. Marco Garmo held a press conference on Tuesday where they said that an internal investigation was underway, acknowledging that the IP address did, indeed, come from their computers.

This message isn’t anything new for police or the internet.  The author illustrates a common “Us vs Them” mentality among police officers that dehumanizes the people they claim to serve.  The “thin blue line” culture is intolerant of dissent, drawing a line between the “real citezens [sic]” and those not worthy of police protection, common decency, dignity or life.

Catherine Mendonca of UAPTSD said, “I really do hope that the broader discussion of why we’re a target can happen #SDSTOLENLIVES need #Justice uaptsd.org“.

A press conference was held outside a San Diego County Sheriff’s Department administrative building this morning, concerning the September 16 hate mail received by police watchdog group United Against Police Terror. The unsigned email had an IP address that matched a Sheriff’s Department building in San Diego. Full info and commentary at an earlier post here.

Five San Diego TV channels covered the rally, so check the local news tonight for coverage of an episode of appalling police behavior in San Diego.