Reading through a history of film textbook, the third chapter included something that pops up quite often among white people- and it’s a terrible and invalid excuse when it’s trotted out.

The Birth of a Nation, a 1915 silent film by D. W. Griffith, is as a historical marker important. Prior cinema tended to be short- less than half an hour, and had a fairly inert camera. Birth introduced film to the scale, length, and cinematography that would define the next hundred years. Children are taught “Zip-a-Dee-Doo-Dah” but not shown the Disney film it came from (Song of the South, here’s the song complete with offensive Uncle Tom character). Similarly, Birth is given much space within the book, but would be very difficult to watch. The pro-Ku Klux Klan message and cringe-inducing black caricatures  bury it in cinematic history.

Griffith didn’t understand the hostile reaction to what he had made. It was a huge financial success, yet met an avalanche of criticism from the large amount of the American public that didn’t buy into the Lost Cause mythos. He didn’t think see it as racist, and sunk a huge amount of money into Intolerance, a movie created solely to show how not-racist he was.

It reminds me of the defense made from many people in many places. The UK Independence Party has several recent examples- members say racist things, then dispute that they are racist, or that they don’t “understand” how people would be offended. It’s grouped with a faux-apology- “I’m sorry if anyone was offended” and its ilk.

White people, especially white men, seem to think this sort of dodge is acceptable. Being ignorant of how racism affects other people isn’t an excuse. It doesn’t make one’s actions not-racist. Too often those who make a racist comment attempt to explain and justify it. Sometimes there’s a misunderstanding. But sometimes it’s a privileged person ignoring public opinion. What people say or what they write and create can be deeply offensive. Just because there isn’t a rigid, natural structure to recognize and understand hate speech doesn’t mean it’s excusable.It’s better to educate yourself out of ignorance than create a fortress and defend the indefensible to the grave.

The truth is far wider than an individual’s perception. Personally each year I learn new things from new people- what offends them, and where does it come from? I don’t show up thinking I know everything about society. If I did, my ignorance would be all the more inexcusable.

The story of all people

is sealed within ochre skin.

Those pale, with skin of soft moonlight

ruling with the sword and lance,

and with time more subtle instruments,

But all justice, mercy.

is bound with ochre skin.

And the stories they contain are the

This photo was taken at a Klan rally on September 5th, 1992 in the town of Gainsville, Georgia on September. The rally was the usual fare for modern-day white supremacists- a few people trying to rile the town up, a huge amount of police, and the media looking for a story.

Todd Robertson took the photo, as the backup photographer for the local daily. It was a late addition to section B of the paper, and though it was never published widely, it has endured. The Southern Poverty Law Center resurrected it for a booklet about combating hate, and it’s finally gained currency on the internet. Though it will never the kind of legacy that MLK pulling a burning cross out of his lawn or other iconic photos of the 1960s, it has a clear and immediate visual message.

The young boy, who was “Josh” according to his mother, embodies how hate is passed down through generations of social reinforcement, not a “bigotry gene” or such. A young child is not a racist nor a chauvinist. They are not a Christian nor an atheist nor a Muslim. They are not libertarians nor paleo-conservatives nor communists. These identifiers are formed over the course of a lifetime- by parents, the community, the church, the school. Some are raised by Klan members, others by tolerant and open-minded individuals. The path to being accepting and embracing diversity is not the same for everyone. While some people are raised and educated in a way that makes such behavior natural and easy, others have to break through years of lies and vitriol.

The journey is a park stroll, or a marathon. And where you start is just chance. 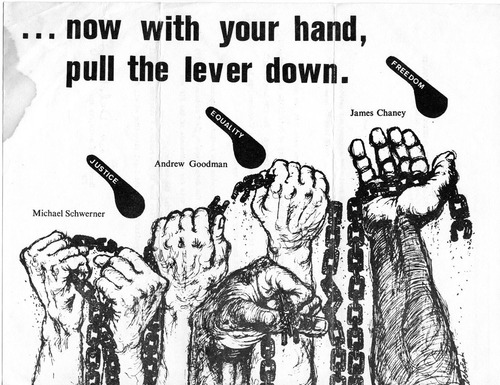 As the nation is meditating on the Voting Rights Act, and what the status of racial discrimination is in the United States it’s important to note that the original efforts to register blacks in the Deep South had a body count. People died to empower others. Michael Schwerner, Andrew Goodman, and James Chaney are only the most famous- the fights before, during, and after racial integration were violent and their effects long-lasting.

Regardless of whether the VRA is needed in the present, it should be considered in context with the past.

This will be a fairly long post, and will address the recent Supreme Court hearings of Shelby County v. Holder, a legal challenge to Section 5 of the Voting Rights Act. It will also discuss racial privilege and the usage of the term ‘racism’- as well as judicial activism.

The Fifteenth Amendment to the Constitution was ratified in 1870. It was the last of the “Reconstruction Amendments” that fundamentally changed how race was viewed in the eyes of the law. The Thirteenth Amendment, recently given spotlight as the focus of Spielberg’s blockbuster film Lincoln, abolished slavery. The Fourteenth is complex but contained the Due Process Clause, which led to protections of individual rights by applying the Bill of Rights to states in addition to the federal government.

The Fifteenth is about voting, as racial equality must also mean political equality. It reads:

Section 2. The Congress shall have power to enforce this article by appropriate legislation.

While this amendment was not truly realized until the civil right movement and federal intervention in the 1960s, it is key to understanding the debate about the Voting Rights Act (VRA) that exists, and the potentially drastic changes that could result from a Supreme Court ruling in Shelby County v. Holder.

END_OF_DOCUMENT_TOKEN_TO_BE_REPLACED

I can safely predict that this will not be the last post about the five hours a week I volunteer for the Boys & Girls Clubs. The vault is already filled with captivating personalities, unusual conversations, and frequent meditations on chaos. Chaos is the best one-word description of what each day brings.

What strikes me about after-school program I work at is how alien the students and even the Boys & Girls Clubs can be. The focus is on high school graduation, as less than half of the students in the communities served are able to finish. Coming from independent private schools, it would have been utter madness to aim so low. Expectations started high and then were jacked even higher- advanced classes, SAT prep, college visits to the Ivy League and their kin. The question was about what high-power profession you desired after your posh education. It would not be an exaggeration to say that my first girlfriend was, and still is, an aristocrat- not only focused on wealth and influence, but to the point that lower rungs of society don’t exist.

Back in high school I considered myself socially conscious. My leftist politics emphasized egalitarianism, ending imperialism, and improving the lives of the poor and ostracized. However “minorities” was a demographic accompanied by a depressing statistic. I wasn’t referring to people I knew or had seen- I used the same tone to talk about nuclear weapons stockpiles.

I drive a couple miles, across a highway overpass into a small residential neighborhood. It’s the same city, with the same police, same recycling pickup, same city council. But there is one key difference.

I am a minority.