The move against religious attire in France- in practice meaning various types of coverings used by some Muslim women- is not new. Recently, however, the brand of secularism touted by French authorities has increasingly come to mirror the restrictions imposed in countries with fundamentalist governments. The horseshoe theory of ideology, ironically created by a Frenchman, posits that the two far ends of the spectrum are more alike than each end is to the political center. Laws banning the ‘burkini’ and other types of clothing definitely give credence to the horseshoe concept. 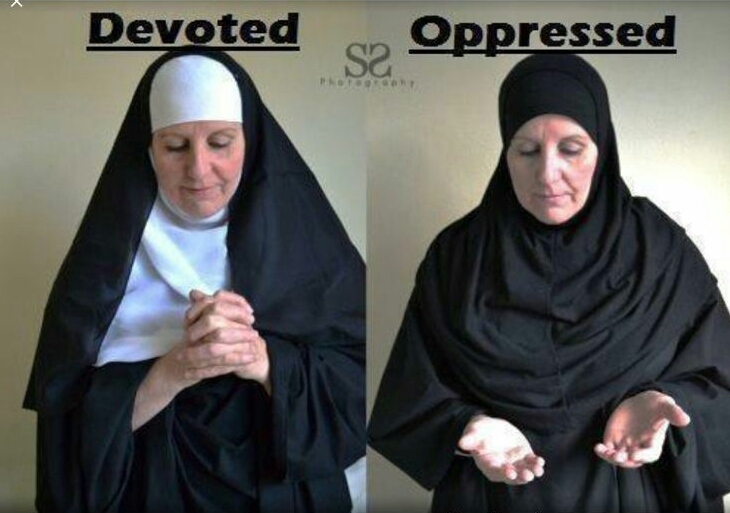 Having armed police order a woman in loose-fitting clothes and headscarf to strip on a beach bears far too much resemblance to the ‘morality police’ in Iran. It’s an example of the limits of Western liberalism- which has always been rooted in European cultural superiority. Freedom of religion is sacrosanct, but only within very particular boundaries. Islam is not a protected group- as was seen when Switzerland banned minarets, yet kept Christian bell towers alone, despite being functionally identical.

In society, there are institutions and processes. Institutions are concrete, and processes are are created and/or influenced by institutions. The hijab is concrete, the processes that lead women to wear it are really, really complicated. France is banning clothing and justifying it by saying it addresses the underlying process. Namely that women who cover to some degree are oppressed, and they are liberated through having certain types of clothing banned.

This rarely works. Clothing, being concrete, is much easier to regulate. Thus it is often chosen not because it is effective, but visible. Increasing airport security does nothing to combat the forces behind terrorism, but it signals that those in power are doing something. However, the core issue was never the hijab, burqa, or burkini. The issue is coercion and male supremacy, which may lead some (but certainly not all) women to don clothing they would prefer not to. And clothing is one of many manifestations of this coercion. It’s just a particularly visible one.

What we get with the French approach is a blanket ban that doesn’t actually solve anything, and fosters a clear cultural bias. Is modesty in public, no matter who you are, now unlawful? Anyone can choose to dress conservatively in public- many of these people are not Muslim, not female, or both. Europe for centuries sanctioned and punished women for showing too much skin, only for the pendulum to swing such that not showing skin is now somehow suspicious.

Women need a lot of things. Access to education and healthcare. Protection from discrimination in the workplace. A safe environment to live. And the ability to decide how they wish to dress, and whose opinion they listen to on the subject. Women do not need to be told how to dress- and those who came from countries with morality police now find in the enlightened West the same, damn restrictions.