The Atlantic has published a long feature by Matthew Renda on the Highway 6- a set of student activists at UC Santa Cruz who were arrested and charged by the authorities for blocking a highway. Their issues were twofold: skyrocketing tuition costs in the UC System, and police violence against people of color. At the same time the university suspended all six, causing them to lose their housing and healthcare.

While The Atlantic has a strange and inconsistent tone on higher education in America, this collected the situation as it exists right now. What is clear is that college administration is becoming increasingly arbitrary when it comes to student protest, and its punishments are so severe considering what other infractions get. A year and a half suspension is a lot more than many universities have handed down for sexual harassment and assault- crimes that often happened on the campus itself. Whether the Highway 6 action was a crime is unknown at this point- though most of the thousands who have blocked highways since the shooting of Michael Brown were not charged, let alone tried. But it is strange (and unjustifiable) to see UC Santa Cruz being zero-tolerance on peaceful protest- and heaping on punishment on top of the authorities who actually have jurisdiction with off-campus direct action.

What separates, as the feature states, someone arrested for protesting at the U.S Capitol or a couple miles from campus? The first did not see any punishment from administration, but the Highway 6 were suspended within hours, denying due process rights reserved for these situations. Their lack of trust in the system have led them to plead no contest in court.

Since Occupy, the state of activism in the UC system is marked by confusion and inconsistency. A major calculation in planning action is possible consequences- but with UC Santa Cruz, the consequence is somewhere between none and grave. These things are supposed to be hammered out through a process that guarantees rights and prevents the exercise of arbitrary power, but the administration is willing more than ever to skip all of that. 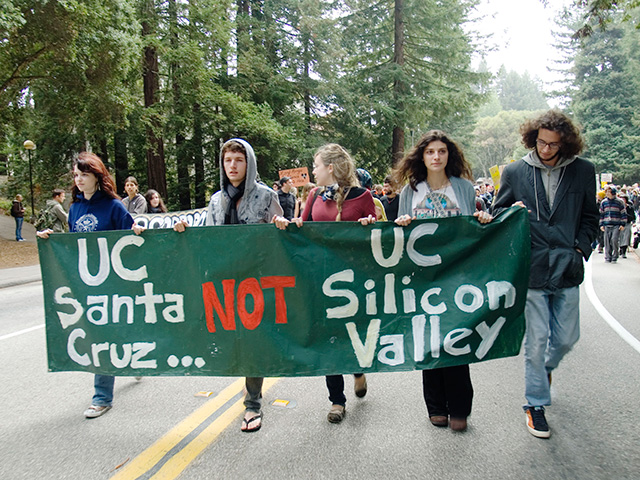 Lost in all this is the message put forth by these student groups- that students and faculty are losing their university to private corporate interest, and all over the country there is injustice against people of color. Their punishment is proof of their concerns- a institution with a history of radical activism is willing to silence it to keep the privatization of education moving forward.