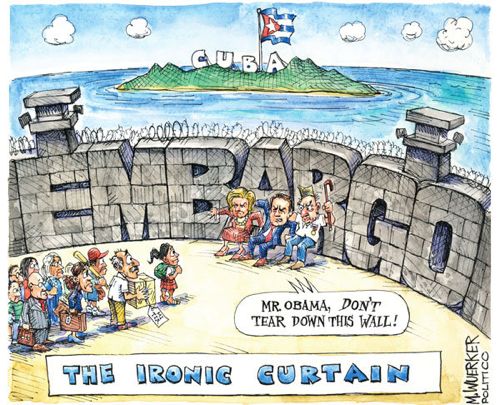 So the Cold War has ended (twenty-three years ago), and the United States is now looking to a more normal relationship with Cuba. The embargo is still untouched and would require a hostile Congress to fully cast aside. This blog I write is always interested in policy and results. Much like the War on Terror, the stance towards Cuba is a great example of a lot of time and energy invested in something with few positive results.

Joshua Keating points out that sanctions towards Cuba haven’t worked (if we take success as the overthrow of the Castro regime, which was their original purpose), and that sanctions in general don’t have a great success rate.

An issue with the general theory of American policy towards Cuba is that this is not global in scale. Most of the world is willing to take Cuba’s money, their doctors, their disaster aid. The Soviets supported Cuba, then later an ad hoc group led by Venezuela. The Warsaw Pact is long dead but Cuba remains defiantly singing The Internationale.

South Africa, the success story of sanctions, had a bit more complex story, and it doesn’t fit well with the Cuban model. Cuba based their foreign policy in opposition to Western imperialism, so their interest in sanctions by Western nations must be viewed in a sharply different context.

Going into the hypotheticals, the policy runs into some issues. If the idea was to strengthen anti-Castro forces (which America funded, especially in the first few years), how is making the general population poorer, and more dependent on government services going to solve anything? As we saw in Iraq in the 1990s, sanctions hit regular people in a different way than those in power. If anything, the gap between the power of the people and the power of the regime grows.

Cuba has a strange, complex history (though let’s be blunt, the United States during the same people does too). What’s clear is that economic pressure from one superpower cannot succeed if the rest of the world isn’t willing to follow suit. And if regime change is desired, are sanctions against Cuba any more successful than North Korea?